In this ever-changing network era, the Internet of Things has already been an important part of the new generation of information technology. In the middle of next month, a grand event in the scientific and technological community will be grandly held from August 18th to 20th by the International Shenzhen Exhibition Center. As a rising star of the Internet of Things, Jinan USRIOT Technology Limited. will also display the company's latest modules and wireless communication products for the first time. Since 2011, what is the winning weapon for this emerging company that has been established for only five years?

According to the introduction of Mr. Gu, the general manager of USRIOT, the company has already successfully applied for more than 40 independent patents, not including the ongoing projects of the company's R&D team. Therefore, their products are highly competitive. After five years of rapid growth, it has become the leading brand of embedded communication in the Internet of Things, invited to participate in exhibitions across the country to win groups of loyal fan, and signed the cooperation agreement with a number of companies to obtain the enthusiastic response. As one of the company's flagship products, the serial device server M4 series is well received by customers.

M4 series serial device servers of USRIOT are used to transparently transmit data between TCP/UDP packets and 232/485 interfaces. The product uses a new generation of Cortex-M4 core, which is featured by low power consumption, fast speed and stable transmission. Compared with the previous generation, the memory capacity, operating speed, and available resources are at least doubled, and the price is much lower than that of the equivalent performance, so it is definitely a cost-effective product.

When talking about serial device servers, most people think of Moxa with higher stability. However, Moxa products are a bit expensive, the price of a single port RS232 serial device server (model is Nport5110A) on Taobao is generally above 700. The price of RS232/485 dual serial device server (model is Nport5230A) is more than 1,300 yuan. When we carefully study the MOXA serial device server, there are a lot of features that we don't need. For example, in the communication protocol, the three protocols of Telnet, SNMP and SMTP supported by the serial device server of MOXA are rarely used by domestic manufacturers. Similar to Moxa's Nport5230A, the price of this dual serial device server whose model is USR-TCP232-410S is only 188 yuan. The 410S is a version which optimizes and upgrades details of hardware and software according to the serial device server 410. There are four major changes in the hardware:First, the terminal power supply mode is increased to make it more secure; Second, 485 is changed to 3 lines, and the ground line is increased to improve anti-interference; Third, 232 and 485 transceiver status indicators are increased; Fourth, the new sheet metal shell process makes the fixture of PCB more firm.The performance of the software is not bad, adding network printing function, Socketb function, custom DNS, soft flow control XON/XOFF, serial AT command setting, and enriching the Modbus gateway function. Not only that, for every product of USRIOT that is sold online, the corresponding materials and test tools or upgrade tools are downloaded at Jinan USR official website (www.usr.cn) , so that consumers do not have to worry about the application problems and product upgrades.

The R&D team of USRIOT has put in too much effort to present these effects. All components are selected according to industrial grade standards. The finished products have also been tested in the high and low temperature test chambers at -40~85 °C for a long term. It can be put into the market after passing the inspection. Only from the chip selection, the main control chip of USR-TCP232-410S uses TI (Texas Instruments) industrial-grade solution, the frequency is up to 120M! What it brings is the rich resources and performance improvement. It can be said that from both price/performance ratio and stability, the serial device server USR-410s has already defeated all opponents at the same price! What's more, the serial device server 410s has also broken through many technical barriers faced by traditional serial-to-network devices. The dual ports serial port network server 410s is installed by the customer. As long as the data is sent to the serial port according to the format, the data will be directly submitted to the web server (such as apache, IIS, tomcat, etc.) by https (GET/POST). The database storage and other processing can be directly done by programmers of ordinary website for PHP, ASP and other scripting languages, which is the best choice for B/S architecture system! In addition, the 410s can also use the underlying data packet (Keep Alive) of the TCP protocol to easily identify dead links and achieve automatic reconnection, which can prevent data loss. 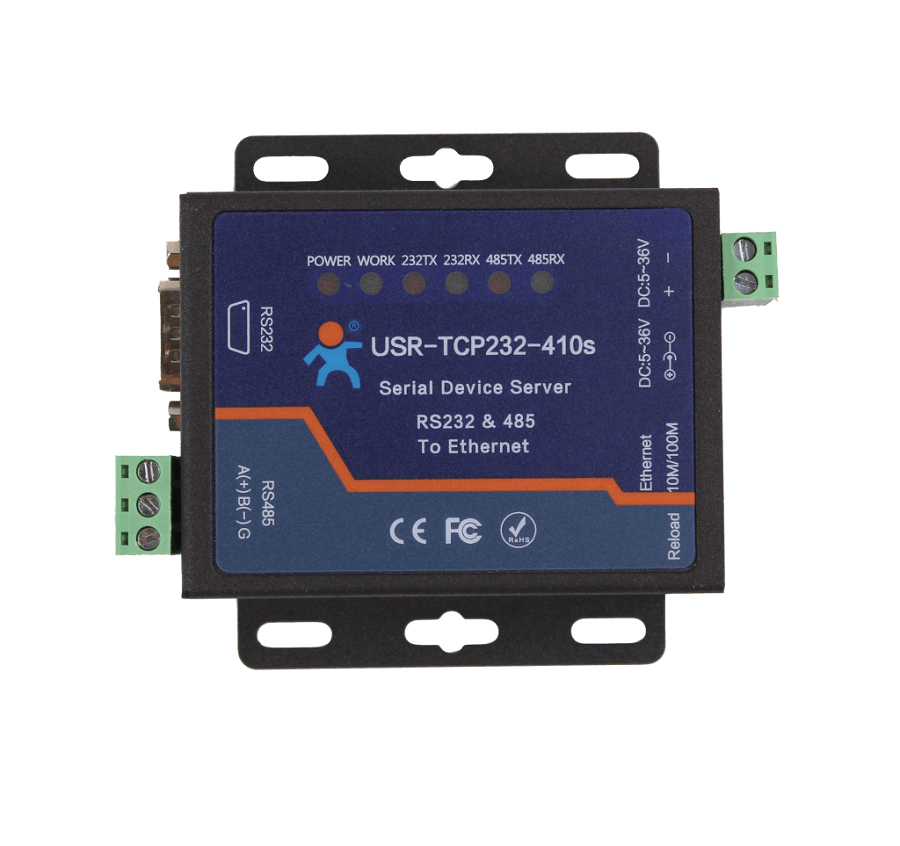 This is an outstanding contribution of USRIOT to the industry, which will surely lead the healthy development of this field, and shine in the industrialization and information market, and promote the progress of social science and technology!